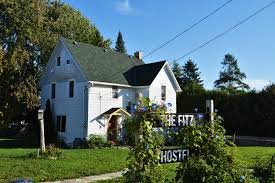 UP SIX at The Fitz

Rrampt is heading to The Fitz Hostel on Saturday, October 5 for a backyard party with three bands, a farm-to-table food truck, and a keg from Mudtown Station.

THE BUS:
Oh, and we've rented a big ol' bus! The bus will leave Owen Sound YMCA (back parking lot) at 4:30 pm, head up Hwy 6 and stop at Hepworth's Suntrail Outfitters and Wiarton's Foodland along the way. The bus will arrive at The Fitz in Lion's Head in time for dinner and drinks before music begins at 6 pm. The bus seating is limited so get your ticket before it fills up!

For the local peninsula crowd, tickets are available without the bus.

THE MUSIC:
Mike Janetta and Josh Ritchie are playing opening slots on our outdoor stage before headliner Dom Louis closes out the night.

Mike and Josh are both local yocals. After coming up to the peninsula for years as a counsellor at Camp Celtic, Mike has moved up full time, and this will be his LH debut! Josh is hot off an album release (and sold out album release party at Colpoy's Bay).

Dom Louis has been making a serious name for himself in the Toronto scene, and this will also be his peninsula debut, but has been cottaging at Lindsay Rd 30 for years. If you like Jake Bugg, you're gonna love Dom.

THE FOOD & DRINK:
The Farm Truck will be featuring local fare from The Easy Farm & other local farms for those who want to buy some tasty grub for dinner. The beer on tap is none other than the tasty brews of Mudtown Station, as well as farm-inspired cocktails and mocktails from The Farm Truck.

THE CAUSE:
Proceeds will be going to the Bruce Peninsula Environment Group in support of local climate change action projects.

Get them:
1. Online at Ticketscene
2. From Megan Myles at The Easy Farm booth at the Lion's Head Farmers' Market
3. From either Jesse Wilkinson or Nelson Phillips at Rrampt

This is an all ages event. Rain or shine, it's going to be one hell of a good time.

UP SIX at The Fitz