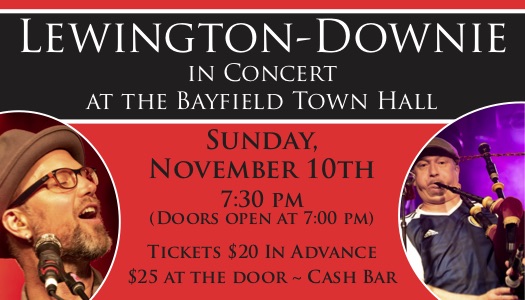 Lewington-Downie at The Bayfield Town Hall

Trevor Lewington and Craig Downie have been writing and performing music together for 20 years as members of
Toronto’s Enter The Haggis. Career highlights include performances on Live With Regis and Kelly, PBS’s Breakfast With
The Arts, and at The Kennedy Center for the Performing Arts in Washington, DC. They continue to headline festivals across
Canada and the US and will be touring Ireland in October of 2019. In 2016 Trevor Lewington released his debut solo album,
Lion of Grace, featuring several songs inspired by historic stories from the Bayfield area. Come out and join them
for a great night of original folk songs, Irish ballads, bagpipe instrumentals and some fun covers.

Lewington-Downie at The Bayfield Town Hall