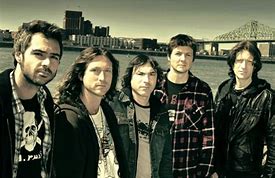 GrimSkunk (Montreal)
www.grimskunk.com
Established in 1988 GrimSkunk is a rock band from Montreal with punk, rock, progressive and world music influences. Its style is self-described as "world punk".  Grimskunk is regarded as being part of the foundation of the Quebec "alternative" and punk scene, having influenced many young musicians and bands.
The band integrates many languages into its songs, such as French, English, Spanish, Greek and Persian. It has also integrated many styles of music, including punk, hardcore, reggae, progressive and psychedelic rock, ska, rap and world music.

Grimskunk will be at The Atria in Oshawa, ON on Friday, November 15, 2019.Doors at 9:00PM EST, and the Show Starts at 9:30PM EST. Grimskunk includes Grimskunk, Cross Dog, Critical Hit!, . The Atria is located at 59 King St East, Oshawa, ON.