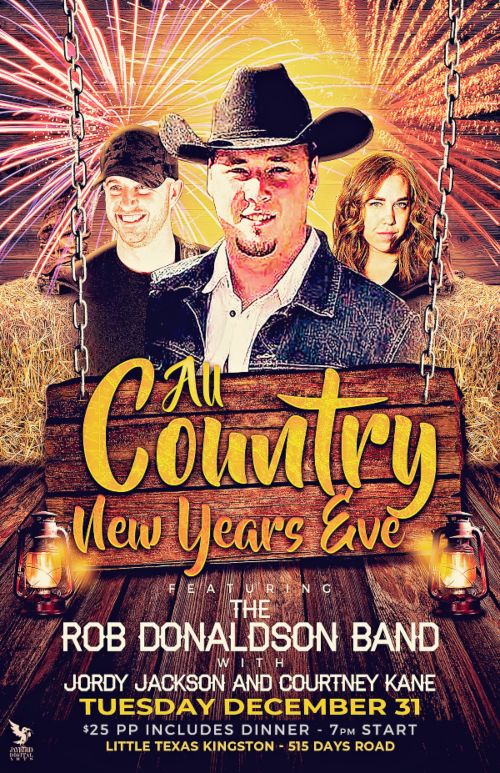 We are shaking things up this New Year's Eve with an ALL COUNTRY LINE UP featuring The Rob Donaldson Band, Jordy Jackson and Courtney Kane. One hot line up to ring in the New Year Country style!

Tickets for the evening are $25 pp which includes dinner, all 3 Country acts and more! Physical Tickets are available at Little Texas and online by clicking the link in the event. Music starts at 7pm!

The Rob Donaldson Band is one of Canada's hottest new acts and we are happy to have them returning for a great night of country music. Hot off a few appearances at Havelock Jamboree catch these guys before they move onto bigger shows!

Comprised of Rob Donaldson (vocals Guitar) Adam Lake (lead guitar) Dillon Lake (drums) Stu Scriver (bass) and Daryl Scott (Guitar) They hail out of Sterling Ontario and brand themselves as a new age honky tonk sound. They deliver a strong powerful performance built on Original music and commanding stage presence. All five band members are song writers and pride themselves on writing songs the people can relate with. They push themselves to deliver the best show possible to their crowds each and every night. They finished in the finals of the Next Country Music Star competition held by the Havelock Jamboree and had fans saying "That wasn't just a show, it was an experience!"

Jordy is one of the areas finest Country musicians playing a blend of both his originals and crowd pleasing covers.

A talented local singer/songwriter that is looking to put her mark on the local country music scene. Courtney covers artists like Terri Clarke, Meghan Patrick, Maddie and Tae, Dolly Parton and more!