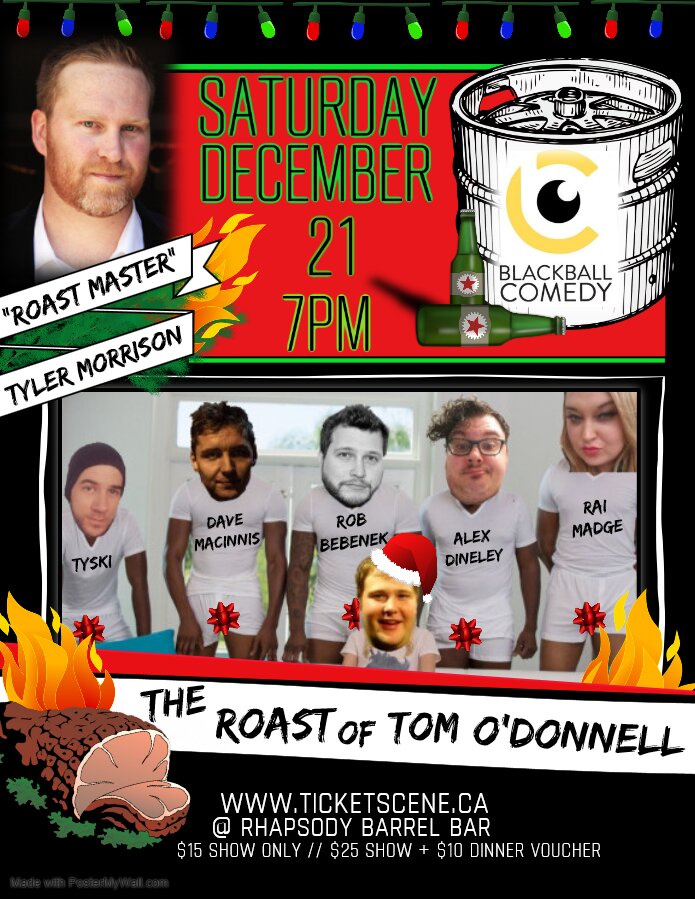 Ladies and Gentlemen! Merry Christmas from Tom and Rai of Blackball Comedy! This is the season for giving and one night only will we be giving you the gift of watching in awe as local hero/comic Tom O'Donnell Kitchener's finest will be handed to an all star lineup of comedian colleagues on a platter for an evening of hilarious tales and well deserved slaughter for holiday mayhem! :

Tom O’Donnell is a stand-up comedian making waves in the scene with break out performances at festivals and clubs across Canada. Some of Tom’s highlights include: multiple performances at The Cottage Country Comedy Festival where he opened for Harland Williams, winning the Yuk Yuks Great Canadian Laugh Off in Kitchener, winning the title of Kingston Comedy Idol, and appearing in The April Fools Comedy Festival 2011. Tom is currently the host of Quick Charge TV on Rogers Television, recently starred in Sons of Terra Nova produced by Hell Creek Entertainment for CBC, and can be heard regularly on Sirius XM Satellite Radio. Tom is also 1/2 of Blackball Comedy, along with partner Rai Madge running the best and hottest weekly & monthly comedy shows since 2016.

THE ROAST MASTER : TYLER MORRISON
Tyler Morrison is quickly emerging as one of the most talked about comedians from Canada with his hilarious brand of working class comedy. He has been featured at The Boston Comedy Festival, San Diego Comedy Festival, Atlanta Laughing Skull Fest, JFL42 Festival, and Caroline’s on Broadway for the Roast of WWE Legend The Iron Sheik. Named one of the Top 10 Comedians of 2014 by SiriusXM Canada, he has also appeared on CBC’s hit show The Debaters, Robert Kelly’s You Know What Dude, and The Ron Jeremy Celebrity Roast where he received a standing ovation.
After winning the Dark Comedy Festival in Toronto, Morrison was selected to host celebrity headliner Gilbert Gottfried’s Ontario tour. Following his appearance at the 2013 NXNE Festival, Morrison was brought back in 2014 to headline his own shows while appearing on bills with the likes of Robert Kelly and Marc Maron.
A leader in the new wave comedy, Morrison won the Social Media Award at the Winnipeg Comedy Festival in 2014 and has twice been a featured winner on Comedy Central’s @midnight Top 10 hashtag wars. His self-produced debut album "Impolitely Canadian" is currently in heavy rotation on SiriusXM, and his debut album "Armed and Hammered" made it all the way to number 1 on the iTunes new release charts. Tyler currently has his own Daily Roast Segment on SiriusXM’s Todd Shapiro Show and is one of the co-hosts of the popular Rude Dudes Podcast.

ROB BEBENEK :
After appearances at the Just For Laughs Festival and a breakout viral video from Winnipeg Comedy Festival in 2018, (over 1.2M views on YouTube and 15M on Facebook), Rob Bebenek has asserted himself as one of the brightest new voices to come out of Canada.
Quick wit and a keen eye for observation, highlight a comedy skill set that is becoming a force on stages across North America, and has audiences wanting more.
As a finalist in SiriusXM’s Top Comic, Bebenek asserted himself as a major player in comedy and has since imposed his brand on Theatres, clubs and colleges, and rightly so. The man is flat out funny.
From Kitchener Ontario, Bebenek AKA Ol’ Bebsie, has been drawing acclaim across Canada earning himself appearances on MTV and opening concert series for Bob Saget, Burt Kreischer, Charlie Murphy, Steve-O, and Gerry Dee, to name a few.

ALEX DINELEY :
Alex Dineley has been offending audiences all around southern Ontario. With his unapologetic style he was winner of the "Blackball Comedy Classic Contest in 2019 and opened for Canadian icon Ed the Sock, while reminding audiences it is never too soon.

TYLER DOMBROSKI AKA TYSKI :
Born and raised in Kitchener, Ontario, Tyler Dombroski (a.k.a. Tyski) has been performing near and far since 2011. Fulfilling his greatest childhood ambition of being a stand-up comedian, Tyski gives fans the long-short of being a working class average dude with a good eye for bad girls. He may only be 5'5", but he's not shy about climbing to the top.
Find future show dates for Tyler on Instagram: @therealtyski

RAI MADGE :
Promoter, Rai Madge booked the room for Tom's show back in The Crooked Sword Days at the Boathouse. Rai and Tom eventually teamed up and started Blackball Comedy together in 2016. Rai has worked behind the scenes for Music Tonight on Rogers TV, various festivals, events & band tours and most recently on Ed The Sock's "War On Stupid" tour on local promotion. Sharp tongued with one liners that'll be sure to leave a mark, she maintains this event has been a long time coming, also she is not dating Tom.