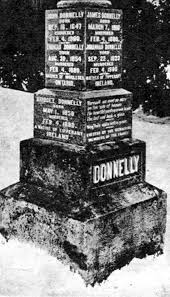 ​​All the songs ever written about this notorious family in Biddulph Township.  It begins with a mass migration of settlers in the 1840s from Tipperary County, Ireland, to Biddulph Township, which includes Lucan Ontario, just north of London. In the pioneer, wild-west atmosphere of Biddulph, the Donnelly family was ostracized and isolated, until finally, in February of 1880, in the middle of a winter night, a mob of vigilantes descended on two of the Donnellys’ homes and five members of the family were brutally beaten and murdered. In spite of the number of witnesses and accomplices to the murders, nobody was ever convicted of the crime.  Features a four-piece band with fiddle, banjo, guitar and accordion