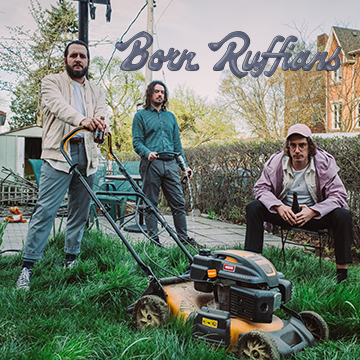 Ten years ago, on the very first song on their very first album, Born Ruffians revealed their ambitions to start their own country. They didn’t really offer details about how they would go about legally annexing land, drafting a constitution or establishing a native currency, but we did know this much: it had a population of three—singer/guitarist Luke Lalonde, bassist Mitch DeRosier and drummer Steve Hamelin. It would have a simple flag made up of the colors waved in the album’s title, Red, Yellow & Blue. And as that album vividly illustrated, their country was a primitive place marked by jagged terrain, rickety footbridges and sudden tremors. Its roughly sketched borders were defended by makeshift fences made of tangled guitar strings, broken drumsticks and—when all else failed—ravenous hoots ‘n’ hollers.

Over time, this lawless territory fortified itself into a stable nation-state. While some citizens left (Hamelin, back to school), its population ultimately increased by 33 per cent (thanks to replacement drummer Adam Hindle and second guitarist Andy Lloyd). The sparse scenery filled in with lush greenery. The rocky turf was gradually paved over with smooth surfaces. That untamed, in-the-wild vibe gave way to the steely efficiency of a big cosmopolitan city. State-of-the-union addresses—in the form of 2010’s Say It, 2013’s Birthmarks and 2015’s RUFF— were broadcast to an ever-growing mass of enthusiasts around the world. Born Ruffians’ makeshift country had become a pretty, prosperous place—thanks to regular alt-rock radio airplay, millions of Spotify listens and non-stop international touring—but it was one that Lalonde no longer recognized. Without his fellow founding father Hamelin by his side, it just didn’t feel like home anymore.

“The band was in a funny place,” says Lalonde of the period following the release of Ruff. “Everything was just different without Steve. And after a few years of him not being in the band, it was starting to feel kind of weird. Ruff was a fun record to make…but it didn’t feel like our band. I was starting to feel like, ‘What is this? What are we doing this for? Is it just because we can get a certain amount of shows per year, and it’s a safe bet?’”

On those early Born Ruffians recordings, Hamelin was more than just a drummer; he was the band’s arhythmically beating heart whose frisky snare-rim taps and spastic thwacks embodied the Ruffians’ feral, unsettled essence. Without him, Lalonde admits, “We kind of pushed ourselves out to that radio-rock realm as close as we felt comfortable with—of trying to go like, ‘Look at what Phoenix are doing; let’s try something like that,’ where we spend a year making the kick-drum sound right. But then, just as my existential crisis about the band was reaching a peak, we started jamming with Steve again. He mentioned he was done school and would be interested in coming back—and Mitch and I were just really surprised.”

With their old drummer back, the Ruffians swiftly reverted to their old battle-plan: recording as a trio, live off the floor, bashing out the tunes in quick succession. “We all have the same weird, shorthand language of knowing how to put a song together,” Lalonde says. “It’s really super-fast and efficient.” At a time when many of their indie-rock peers are keeping tabs on Top 40 trends and incorporating R&B beats and EDM textures, Born Ruffians’ new album, Uncle, Duke & The Chief, feels brashly defiant in its embrace of old-school rock ‘n’ roll aesthetics. In lieu of mouse-clicked studio trickery, it invites you to bask in the natural reverb of the handclaps, tambourine rattles and booming drum beats bouncing off the studio walls. And even though Lalonde primarily plays acoustic guitar here, he does so with a fervent intensity wherein the listener practically feel his finger tips getting sliced on the strings.

Produced by Richard Swift—who knows a thing or two about balancing classicism and anarchy after working with the likes of The Shins and Foxygen—Uncle, Duke & The Chief is a record less concerned with what sounds hip than what feels good. In the Ruffians’ case that meant shedding some of their more arty influences and reconnecting with the sounds they first heard on their parents’ turntables as kids: Buddy Holly, The Everly Brothers and pre-psychedelic Beatles. “It’s about going back to the deepest, most satisfying itch to scratch,” says Lalonde. And in doing so, the album takes you back to a time when the Ruffians sounded less like a band and more like a gang, raising a wild ruckus and speaking in telepathic tongues. “Take ‘Ring That Bell,’” Lalonde says, pointing to a personal favorite from the record. “I just wrote that on acoustic guitar, but then Mitch and Steve did what they do—the weird bassline, the weird drum beat, the weird shifts—and I was like, ‘That sounds like our band, 100 per cent. That’s a Born Ruffians song at its best.’”

But if Uncle, Duke & The Chief is positively brimming with the audible bonhomie of old friends getting reacquainted and realizing they can still finish each other’s sentences, its excitable energy is ultimately fuelled by some serious anxieties. “There’s some dark shit on here,” Lalonde laughs—but only half-jokingly.

While writing the album, Lalonde’s father faced a cancer diagnosis (spoiler alert: he’s okay now!), and the experience dredged up the deep-seated fear of death he’s harbored ever since he was a little kid. (“One of my first memories was realizing that when you die, you die,” he says. “I ran to my mom with this feeling in the pit of my chest, screaming and sobbing.”) Then, while all that was weighing on his mind, one of Lalonde’s musical heroes—David Bowie—passed away. But once the shock wore off, Lalonde came to an unexpected realization. “What really resonated with me about Bowie’s death was how beautiful it was; it wasn’t necessarily a sad thing,” he says. “He died with such elegance: he didn’t tell anybody he was sick, he delivered this final record to everybody, and then quietly passed away. I found it so heartbreaking, but amazing. And I think a lot of the death talk on the record is more about how death can actually be a wondrous and wonderful thing, in a way.”

The very day that Bowie made his grand exit, Lalonde sat down to write “Forget Me,” the song that opens the new record. Over sunrise-summoning acoustic strums, Lalonde sings, “Someday, a white light will come for you,” before adding a reassuring rejoinder: “to comfort you.” In the grand tradition of The Flaming Lips’ “Do You Realize??”, it’s a song about the inevitability of death that proves to be ecstatically life-affirming. “It’s about how the light is something that you should embrace and feel okay going towards it,” Lalonde says. “We’re all doing this together, we’re all on the exact same path—it’s just that some of us are ahead of others.”

From “Forget Me” onward, Uncle, Duke & the Chief daringly tap-dances along the line separating celebration and sorrow. While none of the songs explicitly address his father’s cancer battle, “Spread So Thin” presents a gleaming, soft-focus account of a dream Lalonde had about meeting his dad as a young man, a seemingly sanguine scene that nonetheless underscores the passage of time, the effects of aging, and the inability to recapture the past. And the wistful ballad “Working Together” grapples with a young couple’s difficult decision to terminate a pregnancy, before the song’s “Hey Jude”-sized outro provides the warm communal embrace that friends need to get through tough times. Meanwhile, the album’s barnstorming centerpiece, “Fade to Black,” deals with loss of a different, more insidious kind—that of motivation and spirit.

Says Lalonde, “To me, that’s one of the toughest things about life: The ability to want to do versus the ability to do, and just falling in that void, whether it be procrastination or watching Netflix. ‘Fade to Black’ is about watching people struggle and say, ‘I want to do this’…and then not do it.”
Fortunately, the song’s jangle-punk jitters and heart-racing drum beat provides all the kick in the ass they’ll need. After all, it worked for Born Ruffians themselves. Staring down a career crossroads, consumed with doubt and thoughts of mortality, they’ve responded with a record as beautiful, exhilarating, chaotic and nervewracking as life itself. Uncle, duke and the chief are home again.