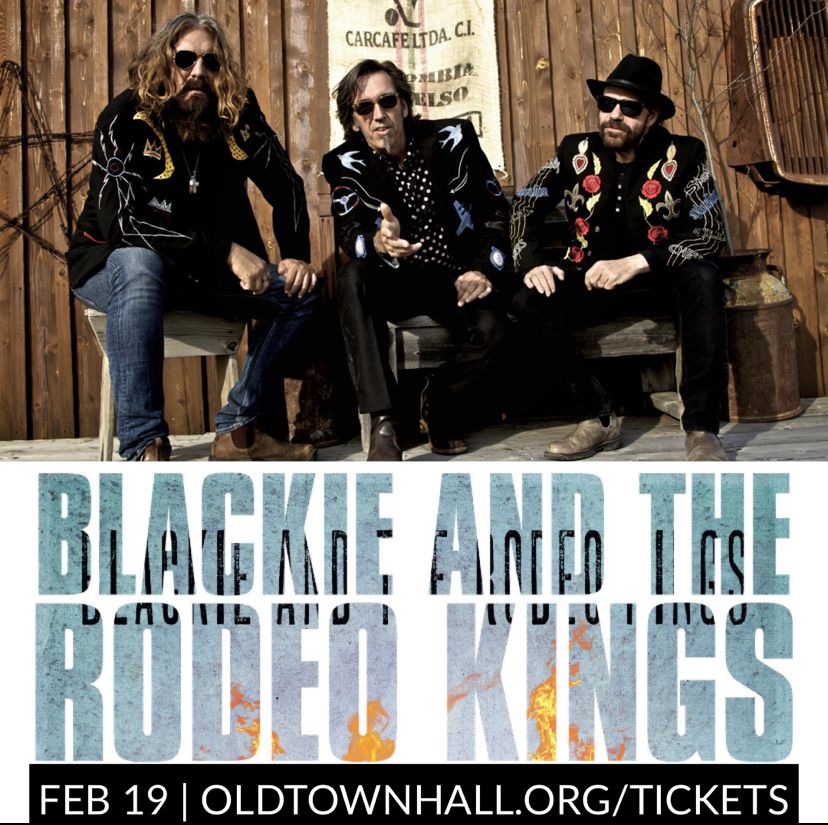 Blackie And The Rodeo Kings

Featuring: Blackie And The Rodeo Kings

This event is sold out.

Join the waiting list and be one of the first to be notified if more tickets become available.

The first concert in our 2020 Concert Series! Blackie And The Rodeo Kings hit the OTH stage Feb 19.

Blackie and The Rodeo Kings mark their 25th anniversary as a band with the release of King of This Town. Originally, Colin Linden, Stephen Fearing and Tom Wilson came together to record what was supposed to be a one-off tribute album to the great Canadian songwriter Willie P. Bennett. The result was High or Hurtin’: The Songs of Willie P. Bennett. The band had no plans to make a subsequent album but something unanticipated happened.
“When we play together and sing together as Blackie and the Rodeo Kings. Something magical happens. We haven’t asked ourselves what it is all these years and we’re not going to start now” as Stephen Fearing describes it.
Recognizing this special chemistry and the resulting joy of creating music together has brought Blackie and The Rodeo Kings back to stage and studio again and again. King of This Town is the band’s ninth release. “After each album, we are never certain we will get together to make another, but then something will happen and we are reminded of the joyride that is Blackie,” explains Tom Wilson.
Twenty-five years in, while they still spend most of each year working on their individual projects, Blackie and

the Rodeo Kings has organically evolved into one of the finest roots-oriented bands in North America.
The new album features eleven new songs, produced by Colin Linden.
“With this album we tried to put a focus on writing songs together. I feel some of our signature songs come from the three of us writing together,” says Colin Linden. The result of the trio song writing collaborations include the first single Cold 100, which features all three of the Kings singing the lead vocal together.
The album was the inaugural recording made at Linden’s new studio in Nashville. The core Rodeo Kings rhythm section remains intact with bassist John Dymond and drummer Gary Craig. The pair has appeared on every B&RK album.
Also making return appearance is Kenneth Pearson (Janis Joplin/Jesse Winchester) on keyboards.
Tom Wilson sums up the Blackie and The Rodeo Kings journey.
“25 years later, we’re still digging in for the sweet spots. Making friends with the ghosts of poets and harmonizing with the voices in fields and swinging for the fences”

Between Blackie
Including every Blackie and The Rodeo Kings album, Colin Linden has produced over 100 albums. He has played as a guest musician on countless recording sessions. There are 159 pages of album credits that feature Colin Linden contributions listed at the collector site discogs.com He has played an integral role in the contributing songs and music direction to film and television. Colin served as the musical director for the live touring the cast of Nashville that featured the stellar Blackie and The Rodeo Kings rhythm section of John Dymond (bass) and Gary Craig (drums). His latest solo work was actual a duo release with Luther Dickenson entitled “Amour” on Stony Plain Records. Colin lives in Nashville.
Colinlinden.com
Stephen Fearing has been doing what he does best - Travelling. In 2016, Fearing moved back to Victoria BC where his career began on the West Coast in 1988 with the release of “Out To Sea”.
Aside from moving across the country, has been a busy year with solo shows across Canada and quietly building a solid following in Europe and The UK. He has completed his 13th solo album “The Unconquerable Past”
Stephenfearing.com

Blackie And The Rodeo Kings