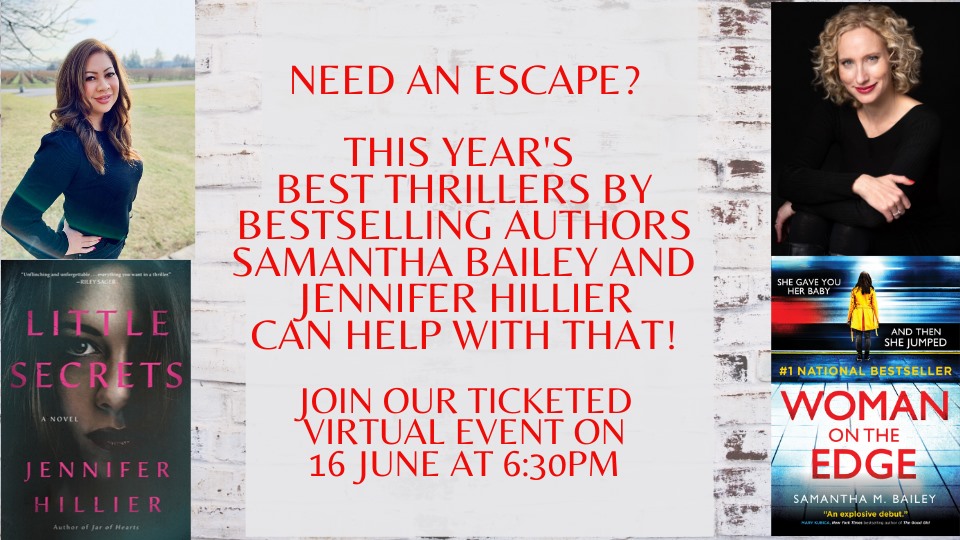 In need of some escapism? Look no further!

Simcoe Street Books and Curiosity House Books have got you covered.

On the 2nd of June at 6:30pm, author Bianca Marais will be interviewing bestselling authors,
Samantha Bailey and Jennifer Hillier about their brilliant thrillers, Woman on the Edge and Little Secrets.

The $25 ticket gets you the book of your choice along with a link to this exclusive live Zoom event. $10 gets you access to the event.

Samantha M. Bailey is a Toronto-based novelist, journalist, and freelance editor. Her work has appeared in Now Magazine, The Village Post, and Oxford University Press, among other publications. She was a writer-in-residence for Kobo Writing Life at Book Expo America 2013 and is the co-founder of BookBuzz, a promotional and interactive author-reader event held in New York City and Toronto.
Her debut psychological thriller, WOMAN ON THE EDGE, is a #1 Toronto Star and Globe and Mail bestseller, received a starred review from Publisher’s Weekly, and was a PW Best Books Pick of the Week. It was the December Fiction Book of the Month at Indigo Books and the Shoppers Drug Mart January Book Lover’s Pick. It made the Pop Sugar list of “25 New Books to Add to Your Reading List This Spring” and She Reads’s “Fifteen Necessary Thrillers to Read in 2020.” WOMAN ON THE EDGE is published in North America with Simon and Schuster Canada, and the UK with Headline. It will also be translated in seven countries world-wide, including with Garzanti in Italy, Roca Editorial in Spain, Heyne in Germany, General Press in Hungary, Euromedia in the Czech Republic, Ikar in Slovakia, and Znak in Poland.

Jennifer Hillier is the author of six psychological thrillers, including Jar of Hearts, which won ITW’s Thriller Award for Best Hardcover Novel and was a Macavity and Anthony Award finalist in 2019 (film rights optioned by Atmosphere Entertainment). Born and raised in the Toronto area, she spent eight years in Seattle, which is where all her novels are set. She now lives in Oakville, Ontario with her husband and five-year-old son. Little Secrets, her newest thriller, was released in April, and is available from Minotaur Books everywhere books are sold.