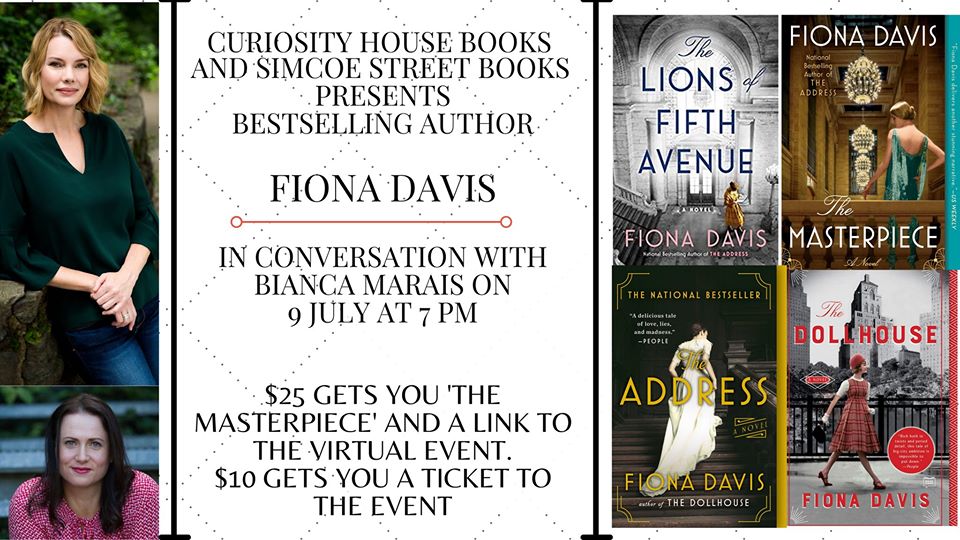 The $25 ticket gets you a copy of 'The Masterpiece' along with a link to the live Zoom event.
$10 gets you access to the event.

“Davis has written another paean to a New York City landmark. Historical fiction fans will love the compelling dual narrators and time periods perfectly captured in this novel based on the history of one of the busiest transportation hubs in the world.”—LIBRARY JOURNAL, starred review

"Davis’s splendid third novel takes readers back in time to the New York of the 1970s and the late ’20s, centering on Grand Central Station ... Davis entices with a fast-paced mystery and expertly reveals parallels between the two periods in New York and between Clara and Virginia, resulting in a true crowd-pleaser.”—PUBLISHERS WEEKLY

“With richly drawn characters living in two storied eras, there is much to be enchanted by.”—KIRKUS REVIEWS

“Fiona Davis has made a name for herself in writing about famous New York City locations, and in The Masterpiece, she delivers another un-put-down-able gem.”—POPSUGAR, Best Book of Summer

“A little mysterious, a little historical, a little feminist, and a lot exciting, this is one book everyone in your book club will love.” —BETCHES.COM

"An incredible story. Historically stunning, with characters that you will never forget. Those that have been touted as ‘must reads,’ this one outshines many of them.”—SUSPENSE MAGAZINE

“A soaringly smart page-turner about art, history, memory, and how two blazingly unique women, separated and yet bound together by different decades, struggle to find their place and make their world their own. Magnificent.”
—CAROLINE LEAVITT, New York Times bestselling author of Pictures of You and Cruel Beautiful World

Nationally bestselling author Fiona Davis has established herself as a master of crafting captivating novels about historical New York City. In her fiction, readers are introduced to iconic New York City landmarks (The Barbizon Hotel for Women in her debut novel, The Dollhouse and The Dakota in her second novel, The Address) through the eyes of women whose lives were transformed by their experiences within the institutions. With meticulous research, dazzling prose, intriguing characters, and an element of mystery, Davis entertains as she enriches readers’ knowledge of bygone eras through a female lens.

Now, she returns with her most ambitious and stunning work to date: THE MASTERPIECE, sweeping readers into the glamorous lost art school within Grand Central Terminal, where two very different women, fifty years apart, strive to make their mark on a world set against them.

The Grand Central School of Art, founded by the painters Edmund Greacen, Walter Leighton Clark, and John Singer Sargent, opened in 1924 and enrolled as many as 900 students a year before closing in 1944. THE MASTERPIECE opens in 1928 with Clara Darden, a talented and ambitious illustrator and the only female teacher at the lauded art school. It’s Clara’s dream to create cover art for Vogue, but not even the prestige of the school can override the public's disdain for a "woman artist," and an illustrator at that. Brash, confident, and single-minded, Clara is determined to achieve every creative success, working tirelessly to make a name for herself. The alternative—returning to her disgraced family in Arizona—is not an option. As she juggles the affections of two men—a wealthy would-be poet and a brilliant experimental painter—the Great Depression looms with the power to destroy the entire art scene. And even poverty and hunger will do little to prepare Clara for the greater tragedy yet to come.

Nearly fifty years later, in 1974, the once luminous terminal is full of grime and danger, and its very existence is threatened as developers seek to reverse its landmark status and construct a skyscraper in its place. The fight to save the building, led by the inimitable Jackie Kennedy Onassis (who makes an appearance in Fiona’s latest novel), informs the story of Virginia Clay, a former socialite fallen on hard times who’s forced to take a job in the information booth as a last resort. But when Virginia stumbles upon an abandoned art school within the terminal and discovers a striking watercolor hidden under the dust, her eyes are opened to the elegance beneath the decay. She embarks on a quest to find the artist of the unsigned masterpiece—an impassioned chase that draws Virginia not only into the battle to save Grand Central but deep into the mystery of Clara Darden, the famed 1920s illustrator who disappeared from history in 1931.

A magnificent work, THE MASTERPIECE expertly blends fact and fiction, providing an inside look at popular locations in Grand Central, including the Oyster Bar restaurant, the Whispering Gallery, and the Campbell Apartment, while deftly illustrating how women’s voices and agency have changed over time, the importance of the arts in our lives, and the hidden stories within New York’s historic skyline.