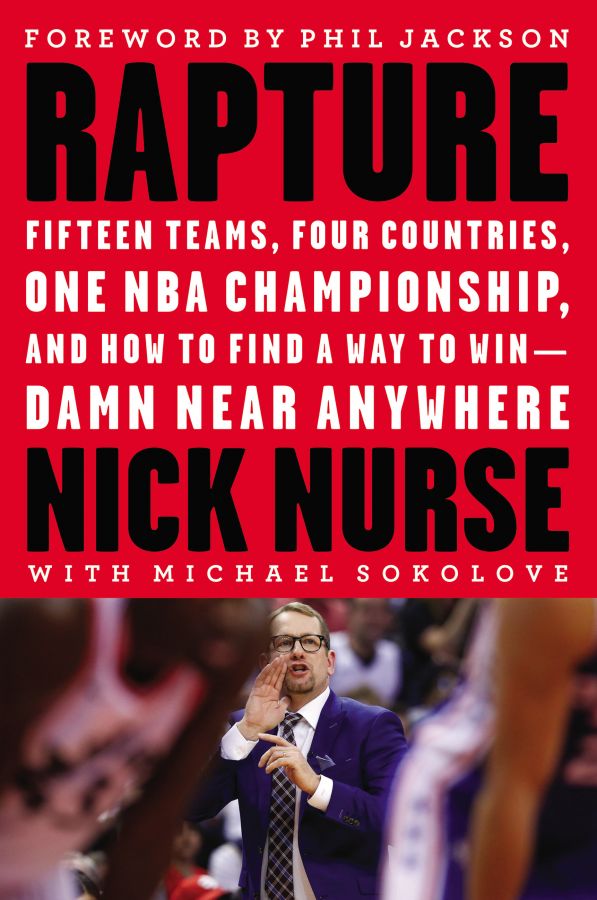 Join co-hosts Matt Devlin and Max Kerman as they speak with Toronto Raptors head coach Nick Nurse about the wisdom, insight, and experiences that helped him lead the Toronto Raptors to the NBA championship in his new book Rapture.

Nick Nurse distills the wisdom, insight, and experiences that helped him lead the Toronto Raptors to the NBA championship in his first year as head coach.

NBA fans had modest expectations for rookie coach Nick Nurse and his Toronto Raptors. But what those naysayers didn't realize was that Nurse had spent the past thirty years proving himself at every level of the game, from youth programs and college ball to the NBA D League and Britain's struggling pro circuit. While few coaches have taken such a circuitous path to pro basketball's promised land, the journey-which began at Kuemper Catholic high school in Carroll, Iowa-forged a coach who proved to be as unshakable as he is personable.

On the road, he is known to bring his guitar and keyboard for late-night jazz and blues sessions. In the locker room, he's steadfast and even-keeled regardless of the score. On the court, he pulls out old-school tactics with astounding success. A rookie in name but a veteran in attitude, Nurse is seemingly above the chaos of the game and, with only two seasons on his résumé, has already established himself as one of the NBA's most admired head coaches.

Now, in this revealing new book-equal parts personal memoir, leadership mani­festo, and philosophical meditation-Nurse tells his own story. Given unprecedented access inside the Raptors' locker room, readers get an intimate study of not only the team culture he has built, but also of a rookie coach's unique dynamic with the star players-such as Kawhi Leonard, Kyle Low­ry, and Pascal Siakam-who helped trail­blaze the 2019 championship run. As much for readers of Ray Dalio as for fans of John Wooden and Pat Summitt, Rapture promis­es to be a necessary read for anyone looking to forge their own path to success.

NICK NURSE is currently the head coach for NBA champion Toronto Raptors and the Canadian Senior Men’s National team. During his 30+ years of coaching experience, Nurse has earned numerous championships around the world at the professional level and a reputation as one of the most innovative coaches.

Nurse was named the 2019-2020 NBA Coach of the Year, and the ninth head coach in Raptors history in June 2018 following five seasons as an assistant. In his first year at the helm, he guided the Raptors to 58 regular-season victories and the franchise’s first NBA Championship title. He became the ninth head coach in NBA history to earn a title in his first season. Nurse has been named NBA Eastern Conference Coach of the Month three times (January 2020, October/November 2019 and October/November 2018) earned honor of coaching Team Giannis at the 2020 NBA All-Star Game in Chicago and is this season 2019-2020 Coach of the Year.

A graduate of the University of Northern Iowa, Nurse began his coaching career at the age of 23 when he became the head coach of Grand View College. He was also an assistant coach at the University of South Dakota before heading overseas. He is a native of Carroll, Iowa. He is married to Roberta and has three sons, Noah, Leo and Rocky.

MATT DEVLIN completed his 12th season with the Toronto Raptors as the club’s television play-by-play voice. He brings a wealth of experience to Raptors games having called NBA action for the Charlotte Bobcats, Memphis Grizzlies, NBA TV and TNT. Devlin has also worked with the NBA and its national television partners since 2002, serving as a play-by-play announcer for TNT’s national coverage. He will continue to do so when his obligations with the Raptors allow.

Considered one of the top broadcasters in the industry, Devlin was named Best Play-By-Play Announcer by the Canadian Screen Awards in 2020 for his working during the Raptors 2019 NBA Championship run. He was also the recipient of Sports Media Canada’s George Gross-Don Goodwin Award for Outstanding Broadcasting in 2019.

Devlin is a 1990 graduate of Boston College. He and his wife, Erin, have three sons, Jack, Ian and Luke. Devlin and his family reside in Toronto and became Canadian citizens on May 31, 2019.

Fronting the unstoppable rock’n'roll band Arkells, MAX KERMAN is considered one of the most passionate and dynamic frontmen in the country. The band has racked up six JUNO Awards, 1 platinum & four gold certified records and four number one singles to date – including their most recent single “Years In The Making.” Kerman's keen awareness of politics and social activism have inspired the lyrics to many of Arkells’ most popular songs, which have propelled the band to being Canada’s most played Alt-Rock act. Their live show is second to none, having sold-out Budweiser Stage - where we saw the band joined by his pal & Toronto Raptors head coach, Nick Nurse - in 1 day last summer.