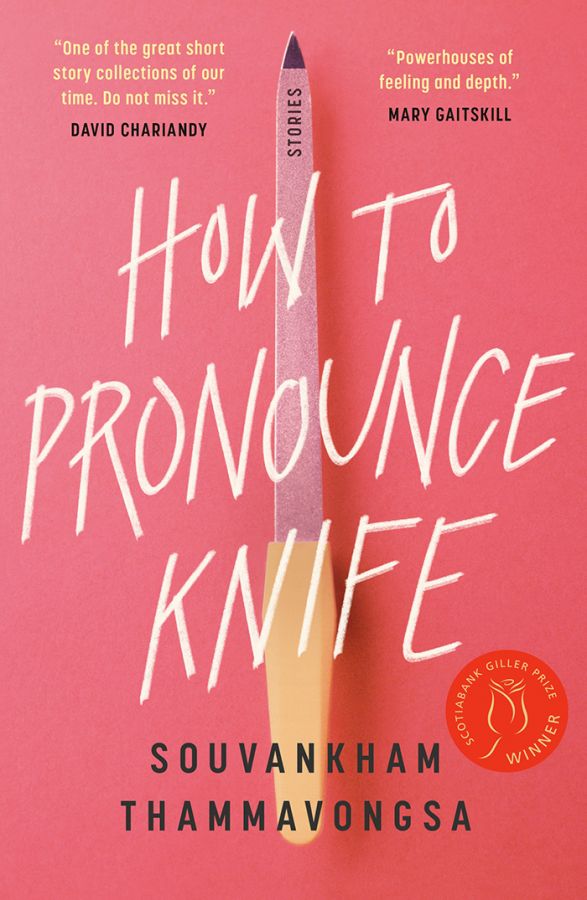 Join Globe and Mail arts correspondent Marsha Lederman as she speaks with Souvankham Thammavongsa, the winner of the 2020 Scotiabank Giller Prize for her debut book of fiction, How to Pronounce Knife. Named one of Time's Must-Read Books of 2020, and told with compassion and wry humour, these stories honour characters struggling to find their bearings far from home, even as they do the necessary "grunt work of the world."

A young man painting nails at the local salon. A woman plucking feathers at a chicken processing plant. A father who packs furniture to move into homes he'll never afford. A housewife learning English from daytime soap operas. In her stunning debut book of fiction, O. Henry Award winner Souvankham Thammavongsa focuses on characters struggling to make a living, illuminating their hopes, disappointments, love affairs, acts of defiance, and above all their pursuit of a place to belong. In spare, intimate prose charged with emotional power and a sly wit, she paints an indelible portrait of watchful children, wounded men, and restless women caught between cultures, languages, and values. As one of Thammavongsa''s characters says, "All we wanted was to live." And in these stories, they do--brightly, ferociously, unforgettably.

A daughter becomes an unwilling accomplice in her mother's growing infatuation with country singer Randy Travis. A boxer finds an unexpected chance at redemption while working at his sister's nail salon. An older woman finds her assumptions about the limits of love unravelling when she begins a relationship with her much younger neighbour. A school bus driver must grapple with how much he''s willing to give up in order to belong. And in the Commonwealth Short Story Prize-shortlisted title story, a young girl''s unconditional love for her father transcends language.

By turns tender and uncompromising, How to Pronounce Knife boldly establishes Souvankham Thammavongsa as an essential new voice in Canadian literature.

Souvankham Thammavongsa's fiction has appeared in Harper's, Granta, The Atlantic, The Paris Review, Ploughshares, Best American Non-Required Reading, The Journey Prize Stories, and The O. Henry Prize Stories. Her debut book of fiction, How to Pronounce Knife, is the winner of the 2020 Scotiabank Giller Prize and one of Time's Must-Read Books of 2020. The title story was a finalist for the Commonwealth Short Story Prize. Thammavongsa is also the author of four poetry books: Light, winner of the Trillium Book Award for Poetry; Found; Small Arguments, winner of the ReLit Award; and, most recently, Cluster.  Born in the Lao refugee camp in Nong Khai, Thailand, she was raised and educated in Toronto, where she is at work on her first novel.

Marsha Lederman is the Western Arts Correspondent for The Globe and Mail, based in Vancouver, where she recently had the pleasure of covering the Scotiabank Giller Prize – and writing about this year’s award recipient, Souvankham Thammavongsa. Before joining The Globe, Marsha worked for CBC Radio, where she was national arts reporter. Born and raised in Toronto, Marsha has lived in Vancouver since 2007. Her first book, Kiss the Red Stairs – a memoir about intergenerational trauma – is scheduled to be published by McClelland & Stewart in 2022. Her very favourite place to be is the bookstore.