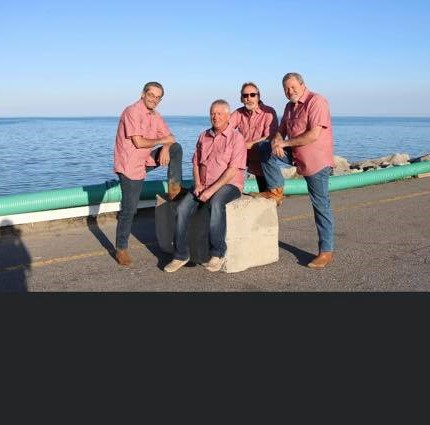 Classic country at its best!

Let me introduce the Burnt River Band, consisting of, Paul Wasson, bass guitar/lead vocals, Tom Mark, lead guitar/harmony vocals, Pat (peewee) Thompson, on pedal steel guitar, and John Meydam on drums/percussion. The band was founded in the early 1980’s and reformed in the early 2000’s. the band has been featured with Johnny Burke, Harold McIntyre, Myrna Lorrie, along with several Nashville artists. This band has performed in breakfast television twice. They are still very active doing the jamboree circuit, night clubs, and major shows across Ontario.
Bios enclosed below
Paul Wasson
Singer, Songwriter, Bass and Guitar
Paul has played the Canadian circuit for years. He is a talented and versatile musician, who plays a fine guitar and bass, and is one of the best singers in his field today.
Paul was born in Story Town New Brunswick and began his musical career when he was 12 years old. He sang in jamborees and talent contests across Ontario and, when he was 17, he had his first professional job with the Shirley Field Show. In the early days, Paul was featured on his own cable cast show in southern Ontario. He has also appeared on the well-known Opry North Show in Toronto.
Paul has been a featured performer with the late Mary Osborne of the Don Messer Show, with Diane Leigh and The Shades of Blue, Johnny Burke, Heather Haig, the Mike Mcgivern Show, Stonewall Jackson and countless others. For 30 Years, we hosted the musicians corn roast in memory of Larry Dee for the Port Perry and Blackstock lions club.
Tom Mark
Guitar, Dobro, Harmony and Lead Vocals
Tom has been playing guitar for 35 years, having grown up around his musical uncles with whom he performed locally. He has also been with Paul and many others since the early days, in fact, cites Paul’s father, Hubert Wasson (New Brunswick hall of famer), George Jones and James Taylor.
Tom’s performing career stints with Chef Adams, Sweet Daddy Siki, and with loving memory Larry Dee and Dotty in a band which again included Paul. In addition, he has performed with Johnny Burke, Harold McIntyre, Mike McGivern, Tim Taylor, and many others. Tom’s diverse career has also taken him to Kingston, Milhaven, Workworth, and Penetanguishene prisons performing.
Pat (peewee) Thompson
Pedal Steel and Rhythm Guitar
Pat has been active in country music scene since 1964. In this time, he has played many special venues, pubs, concerts, fundraisers, ect. Pat has backed well known entertainers such as, Harold McIntyre, Johnny Burke and manty other noted musicians. Pat is currently with the very popular Burnt River Band.
John Meydam
Drums and Percussion
John Meydam has performed with a variety of top entertainers to include the iconic horseshoe tavern in Toronto, opening for countless Nashville acts, the house band, Shotgun, at the coral in Oshawa, backing Canadian artists every week. John also worked with Canadian legend, Tommy Hunter, touring Canada and the USA over a 4 year period. Also, a member of Johnny Burke and Eastwind for over 20 years. He is now an active member of the Burnt River Band and looking forward to another season doing what the Burnt River Band does best, playing classic country music.
The Burnt River Band consists of 4 very talented musicians at the top of their field. The band is still very popular to this day, selling out venues.