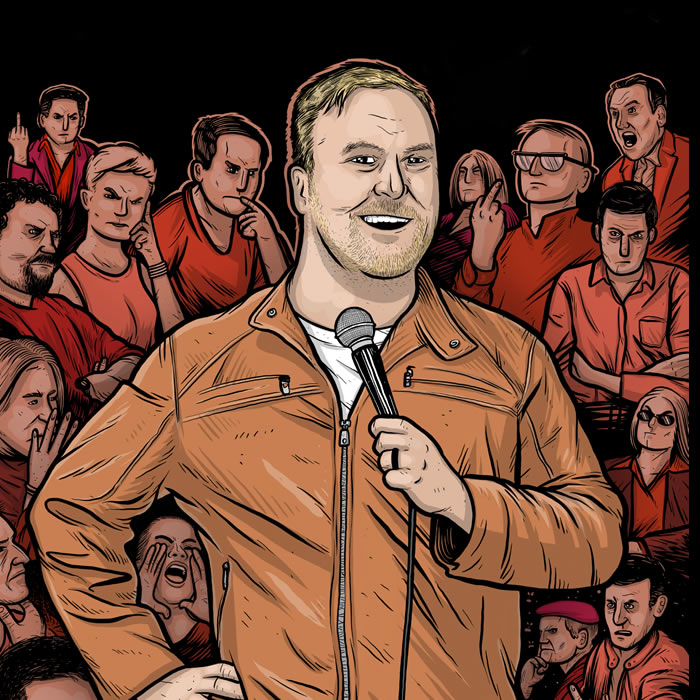 Tyler Morrison is one of fastest rising comedians in North America with his hilarious brand of working class comedy. After winning the Dark Comedy Festival in Toronto, Morrison has headlined comedy clubs across Canada selling out all 20 shows on his Killer on the Road Tour leading to an appearance as part of Toronto’s annual Massey Hall New Year’s Eve Extravaganza.

A festival favorite, he has been featured at The Boston Comedy Festival, San Diego Comedy Festival, Atlanta Laughing Skull Fest, Just For Laughs 42 Festival, CBC’S Winnipeg Comedy Festival and Caroline’s on Broadway for the Roast of WWE Hall of Famer The Iron Sheik. In 2014 he was named one of the Top 10 Comedians by Sirius XM Canada where he had his own daily roast segment. He has since appeared on CBC’s hit show The Debaters, Sirius XM’s Raw Dog channel, Robert Kelly’s You Know What Dude, and The Ron Jeremy Celebrity Roast where he received a standing ovation for his performance (on top of being the head writer).

Regarded by many as Canada’s best roast -comedian, he has written and performed on roasts featuring notable names such as Gilbert Gottfried, Jim Norton, Big Jay Oakerson, Tony Hinchcliffe, the NHL Alumni, and the Toronto Raptors. He has even written roast material for the current mayor of Toronto, John Tory.

In 2018 he was chosen to open for Doug Stanhope in Toronto as part of his Second Wind Tour, and his recent Roast of America against Ms. Pat at Montreal’s Just For Laughs Comedy Festival has helped put him on the comedy map. Following that he recently released 2 new standup albums/specials Comedy Exile and Savage which debuted at in the #1 and #2 spots on the iTunes Comedy charts. When he is not busy touring doing standup he co-hosts the brand new podcast Fight Stories with comedian John Moses interviewing guests ranging from UFC icon Ken Shamrock to comedy legend Artie Lange.