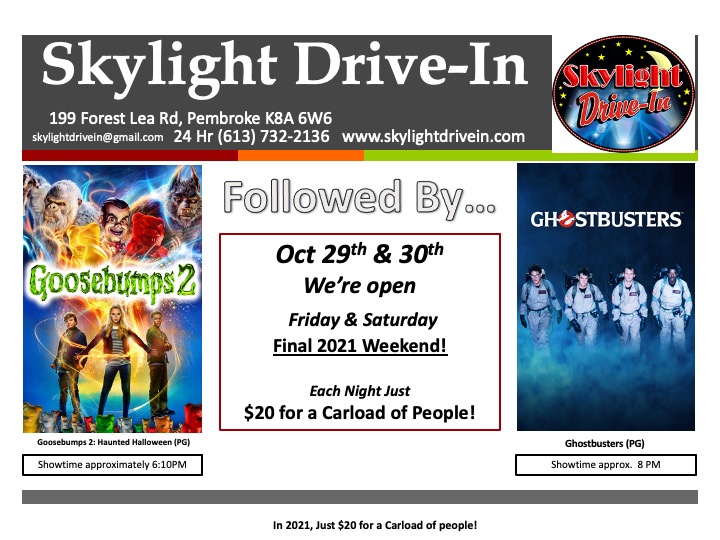 Skylight Drive-In in Pembroke ON is now open 2 nights a week for great family movies and nostalgic fun. Carload of people only $20 all season long. Maximum 6 persons per vehicle. Social Distancing in effect. Spaces are limited, buy your tickets in advance to avoid disappointment. Show starts at dusk, Approximately 7 PM this week. This ticket is for a double header.

Teenager Sarah Quinn (Madison Iseman) lives with her mother Kathy (Wendi McLendon-Covey) and younger brother Sonny (Jeremy Ray Taylor) in Wardenclyffe, New York. Sarah is attempting to get into Columbia University by writing an essay about fear. Kathy agrees to watch Sonny's friend Sam Carter (Caleel Harris) while his father goes out of town. Sonny and Sam are attempting to start a garbage cleanup business, and are called after school to clean up an abandoned house. Inside, they find a locked manuscript and open it, causing Slappy the Dummy to appear. They unknowingly bring him to life by speaking magic words found in his pocket. The book is later stolen by a bully named Tommy Madigan (Payton Wich). At home, Sonny is working on his science project, a miniature version of Nikola Tesla's Wardenclyffe Tower. Slappy then reveals he's alive to Sonny and Sam, and gets their trust by using his magic to do the boy's chores and homework. Meanwhile, Sarah goes to a party to meet her boyfriend Tyler (Bryce Cass), but sees him kissing another girl. Later she arrives home and complains about him to Sonny and Sam, which Slappy overhears. Slappy then proceeds to sabotage Sonny's project..

Peter Venkman, Ray Stantz and Egon Spengler work at Columbia University. where they delve into the paranormal and fiddle with many unethical experiments on their students. As they are kicked out of the University, they really understand the paranormal and go into business for themselves. Under the new snazzy business name of 'Ghostbusters', and living in the old firehouse building they work out of, they are called to rid New York City of paranormal phenomenon at everyone's whim. - for a price. They make national press as the media reports the Ghostbusters are the cause of it all. Thrown in jail by the EPA, the mayor takes a chance and calls on them to help save the city. Unbeknownst to all, a long dead Gozer worshiper (Evo Shandor) erected a downtown apartment building which is the cause of all the paranormal activity. They find out the building could resurrect the ancient Hittite god, Gozer, and bring an end to all of humanity. Who are you gonna call to stop this terrible world-ending menace?

ALL SALES FINAL. NO REFUNDS. RAIN OR SHINE.

The Rules have not changed for Drive-In’s.
1. Park 2 Metres away for your neighbour.
2. Sitting outside is permitted, but note rule #1!
3. Masks must be worn if you are entering the building for the snack-bar or bathrooms.
4. Vaccine passports are NOT required, as you have your mask on while in the building.