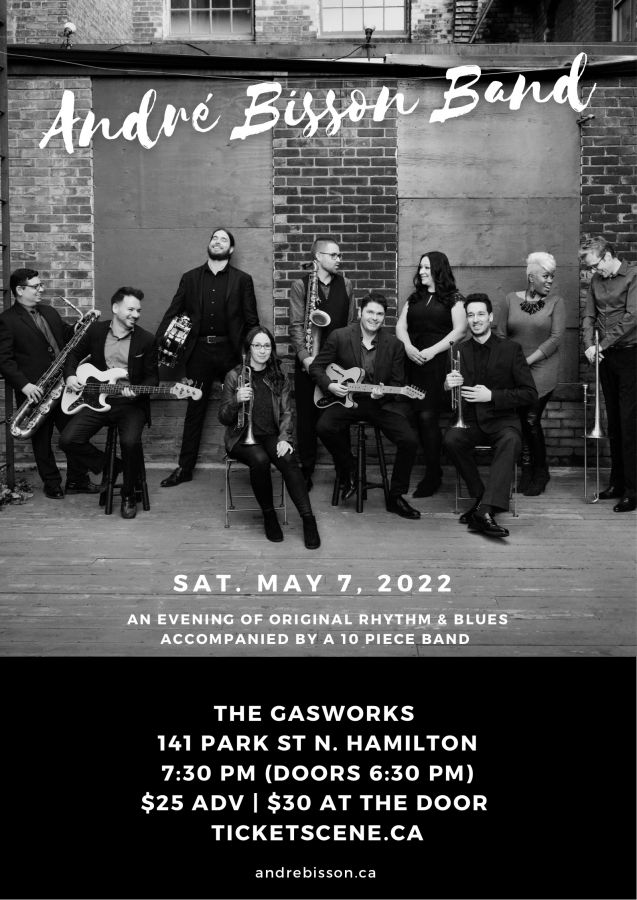 Come hear Andre's flavour of classic Rhythm & Blues, Soul and Roots music with an all-star 10 Piece Band that always has a horn section!

Address: 141 Park St. N. Hamilton
https://www.thegasworks.ca/
Parking available at the venue and nearby

Since 2005 Andre Bisson has been performing his unique blend of original Rhythm & Blues and Soul Music throughout Canada, USA, and Europe. Andre has recorded, composed and arranged 8 studio and award winning albums that have reached orchestrations of up to 20 pieces and that has led to several international tours and sold out concerts. Notably Andre won the Male Vocalist of year award for the 2015 Hamilton Blues Awards. He was also nominated for a 2017 Maple Blues Awards, and a 2018, 2019, 2021 Hamilton Arts Award. Recently his song "Is this Happening" won in the male category International Song of the Year with Blues & Roots. Andre will be releasing his next album in Fall 2022!

“Deep emotions delivered by an impassioned singer with strong songs and a tight backing band. How can you go wrong?” You just can’t. Pick this soulful work up!
– Blues Blast Magazine

“Prepare to be not just impressed, but moved. On Break, the soulful songs can heal your broken heart, or they can break it, leaving you begging for mercy and begging for more. Just like life itself”
– Rock and Blues Muse

“Whirling sounds of organ, bountiful blasts of brass, and a groovy sax solo puts me in my happy space” Philly Cheeze’s Rock and Blues Reviews
“Proving himself as a true artist through and through time and time again, Bisson checks off every box with Break” – Canada Beats
This Hamilton-based band’s horn-based retro soul moves markedly forward with an all-original program by Bisson, the bandleader, vocalist and guitar player and sometime piano player.
One listen, though, will tell you that he has a fine group of willing accomplices on board. Add in a couple of guests and you can transport yourself right back to the Club Bluenote. “Bad Scene” serves up a slab of funk for the opener. “Wasting Time” & “Timeless Love” keep the groove going with gorgeous melodies, something Bisson excels at.
– John Valentyn – Toronto Blue Society – Maple Blues Magazine See less