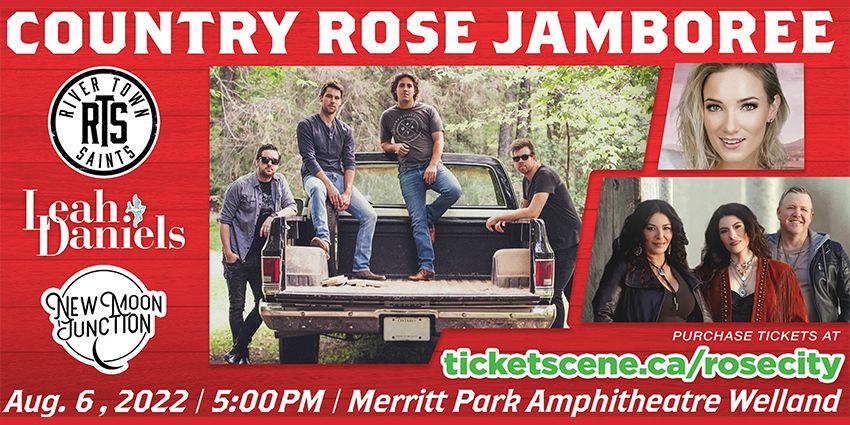 Country Rose Jamboree- An Evening with The River Town Saints

Niagara's Hot Country Party of the Summer! Enjoy an award winning lineup of country in the dog days of summer with top charting artists The River Town Saints who captured the 2021 Best Group Nominations at the Country Music Association of Ontario.

Providing an hour performance is Country Music Association of Ontario award winning artist Leah Daniels and a group on the rise set to create their own magic as "Ontario's Best Little Secret" New Moon Junction with the new addition of Brad Battle to their lineup.

It's time for us to care more for one another.

Bring as many Non Perishable food items as we "Hee Haw for Hope", to help out the needy and Welland's Hope Centre that has been there for so many people over the years!  Donations are welcome at the event.

This is an all ages licensed outdoor concert. Doors open at 5:00PM with a 6:00PM show start!  Get there early and enjoy one great night of Country on the banks of the Welland Canal! Tickets $89.00 at Door (if available)

The sudden death of one of the founding members, replacing a lead singer, and just when they had all of that figured out and were ready to introduce the world to River Town Saints 2.0, a global pandemic came along. River Town Saints have a lot to show for the past few years, including; millions of YouTube views and Spotify streams, a top 10 hit with their single, “Bonfire”, CCMA nominations, CMAO and Canadian Radio Music Awards, tours with Tim Hicks, Kip Moore and large-scale festivals, their single “Long Time Coming” reaching the Top 40 and the Stingray group of stations selecting the single as their Trending Track for June/July 2021.

Known for their energetic live show, rich vocal harmonies and good times, the Saints are just getting started. Throughout the past two years, River Town Saints have headlined or performed at a number of drive-in concerts including the City of Pembroke, Huntsville, Kirkland Lake, Crooks Rapids Country Fest, Manitoulin Island, Winding Roads Big Brothers/Big Sisters charity fundraiser in Port Perry, the Carp Fair to name a few. They have also been instrumental in assisting in raising over $50,000 for mental health and wellness in Ontario. “What Ya Doin' Tonight” is the latest single from River Town Saints. It is a power driven single that highlights the band’s incredible harmonies and musicianship. It is sure to have diehard fans singing along, and winning over scores of new fans. River Town Saints have been busy writing and recording with producer Sam Guiana (Silverstein) at Room 21. Look for the band’s full length album in 2022.

“Maybe a Little” is the latest single from River Town Saints. Call it therapy?  Call it closure?  Both Chase and Chris had recently gone through serious breakups in their personal lives.  This song is about trying to move on, get back out into the dating world, and letting go of the past.
"Maybe A Little" is a song that anyone that has (or is) going through a breakup can relate to.  The emotions, the questions, and putting the pieces of your life back together. This song was recorded in Toronto with producer Sam Guaiana, more of a pop country approach was taken while making it.

New Moon Junction, the Ontario-based trio of Barb, Tamara, and Brad introduced themselves to the Canadian Country music scene last year. They quickly made a name for themselves and have been called “Ontario’s best kept secret”, “Country’s Hottest Trio”, and “Canada’s Lady A”.

After they delivered their first single “Real Good Kinda Thing” in Feb of 2021. They followed that up with a summer release titled, “The Other Side of Goodbye”, which was also received with excitement and enthusiasm by their new and growing fanbase. They were invited to perform at a number of shows during the summer of 2021 where the fans had the opportunities to experience their high energy live performances backed by some of the industry's finest musicians. The band's newest single,”Don’t” that dropped in Feb 2022 is about the longing of lost love and how hard it is to let go. Delivered with their unique blend of harmonies and a seamless combination of new and old school country crafted to perfection by Multi-platinum selling producer Jeff Dalziel. As the group continues to expand their fanbase and gain momentum you can expect to hear more great music coming your way.