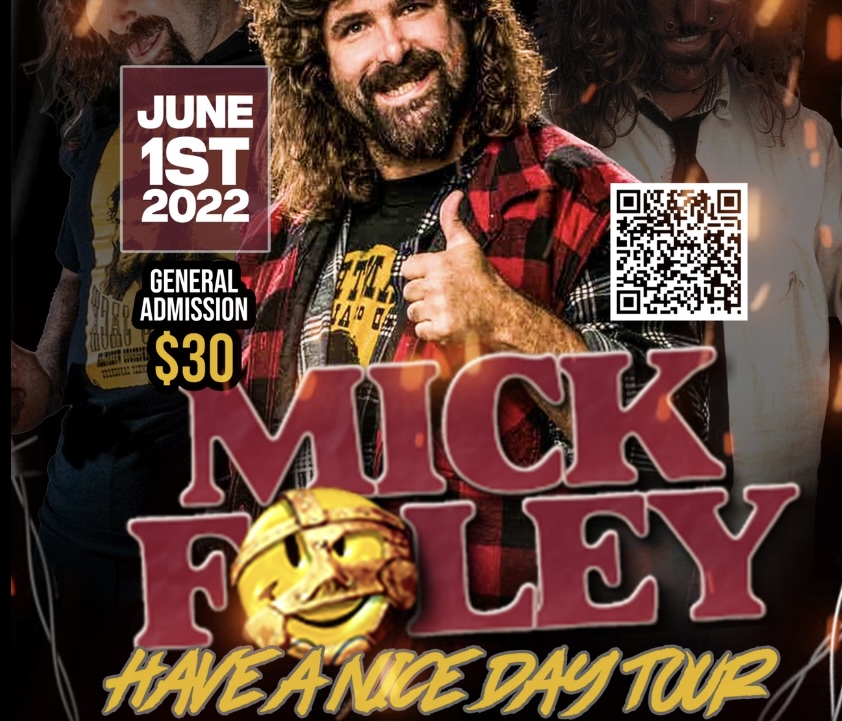 Presented by SKM Promotions & Back in Time Comics

Michael Francis Foley was born on June 7th, 1965, in Long Island, New York. Nicknamed Mick by his father, a lifelong Yankees and Mickey Mantle fan, he attended college in upstate New York, he hitchiked to New York City to see a wrestling match between Jimmy Snuka (Jimmy Snuka) and Don Muraco that convinced him he wanted to be a professional wrestler. He trained under the tutelage of Dominic DeNucci, alongside such wrestlers as Shane Douglas, and made his debut in the late 1980's. He wrestled all around the U.S., Europe, Japan and Africa before landing a job in World Championship Wrestling as under the name Cactus Jack. He wrestled in excellent feuds with Sting (Steve Borden), Rick Steiner, Scott Steiner, and most notably Vader (Leon White), against whom he lost an ear mid-match in Germany in 1992. Around this time, he met his future wife, Collette Foley. His tenure with WCW at an end, he wrestled for Extreme Championship Wrestling under Paul Heyman, and in Japan, where he took place in (and won) the now legendary _IWA King of the Death Match (1995) (V)_. This attracted the attention of 'Vince McMahon', who brought Foley in to the World Wrestling Federation, under the name Mankind. Foley's first feud was with The Undertaker, against whom he wrestled several classic matches, most notably _King of the Ring (1998) (V)_, where, in possibly the most famous professional wrestling moment of all time, The Undertaker threw Foley off the top of a 20-foot cage, through a table. Foley's lifelong dream came true on December 28th, 1998, when he defeated The Rock (Dwayne Johnson) to win the WWF World Title. He would hold the belt three times before his career ended at WrestleMania 2000 (2000). Now retired, Foley is a bestselling and critically acclaimed author, having wrote two autobiographies (both of which topped the New York Times bestseller charts), a series of children's books, and a novel.