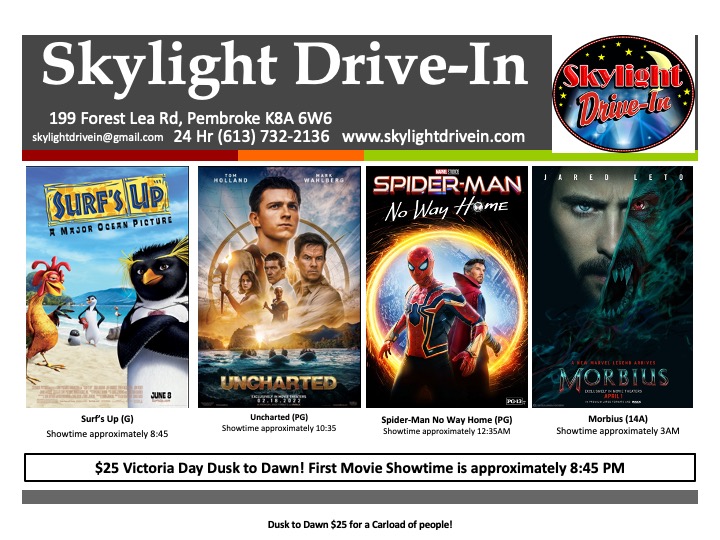 Skylight Drive-In in Pembroke ON is now open 4 nights a week for great family movies and nostalgic fun. Carload of people only $20 all season long. Maximum 6 persons per vehicle. . Show starts at dusk, Approximately 9 PM this week. This ticket is for a double header.

This story follows a teenage rock hopper penguin named Cody Maverick from his hometown of Shiverpool, Antarctica, where all of the other penguins think he's nothing but a surfing fool, to the "Big Z Memorial Surf Off" on Pen Gu Island. Young Cody is determined to win the most important competition in the world of penguin surfing in honor of "Big Z," a deceased surfing legend whom he has idolized since childhood. But the waves in Pen Gu are different than in Shiverpool, and the competition is steep. The current champ, egotistical Tank Evans, isn't just about to let this little penguin knock him from first place without a fight. When Cody wipes out and encounters Geek, a recluse aging former surfer, living in the jungle, he learns some important lessons about life and surfing, and even teaches Geek a thing or two.

Street-smart Nathan Drake (Tom Holland) is recruited by seasoned treasure hunter Victor "Sully" Sullivan (Mark Wahlberg) to recover a fortune amassed by Ferdinand Magellan and lost 500 years ago by the House of Moncada. What starts as a heist job for the duo becomes a globe-trotting, white-knuckle race to reach the prize before the ruthless Santiago Moncada (Antonio Banderas), who believes he and his family are the rightful heirs. If Nate and Sully can decipher the clues and solve one of the world's oldest mysteries, they stand to find $5 billion in treasure and perhaps even Nate's long-lost brother...but only if they can learn to work together.

Peter Parker's secret identity is revealed to the entire world. Desperate for help, Peter turns to Doctor Strange to make the world forget that he is Spider-Man. The spell goes horribly wrong and shatters the multiverse, bringing in monstrous villains that could destroy the world.

Dangerously ill with a rare blood disorder, and determined to save others suffering his same fate, Dr. Morbius attempts a desperate gamble. What at first appears to be a radical success soon reveals itself to be a remedy potentially worse than the disease.

ALL SALES FINAL. NO REFUNDS. RAIN OR SHINE.