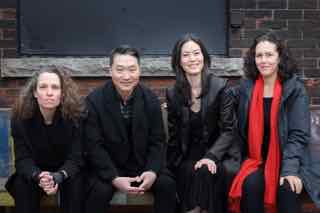 The Madawaska String Quartet got together in 2002 and has performed widely ever since, including many at our Music Room. They play with polish and enthusiasm and have inspired highly favorable reviews from many sources. They all have separate careers as well as  having earned advanced degrees from many institutions.

SCHUBERT: Qt. No. 9 in g (D173) Most people know the quartets ofe Schubert only from his last four qouartets. But he did write eleven before those, and they reveal a young genius at work, and in a more genial mood than usual!
MOZART: Qt. in Eb, K. 428 - This is one of the six maseteerp[ieces devoted to Mozart's friend and mentor Joseph Haydn. It is worthy of its exalted company!

DVORAK: (some of the) Cypresses  Dvorak wrote pieces called "cypresses" as love songs, but he rescored 12 of the original 18 for string quartet as well, in which version they have become more popular than the originals! The Madawaska Quartet will announce which ones they have chosen to pereform for us.