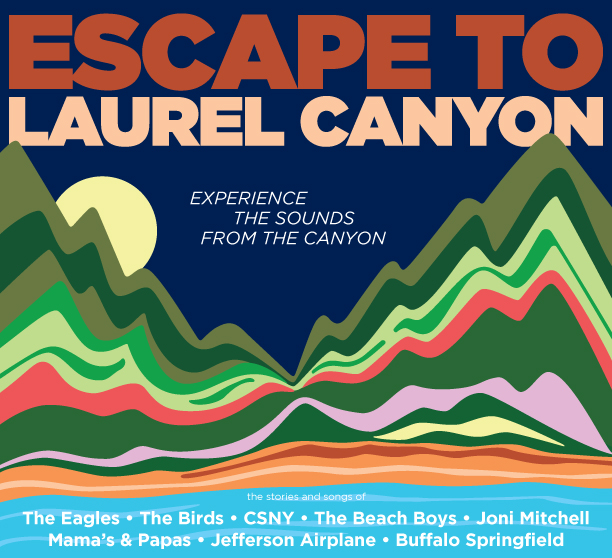 They made music together, formed bands together, made history together…and became legends!

Some say the Laurel Canyon music scene began when Frank Zappa moved to the corner of Lookout Mountain and Laurel Canyon Boulevard in the late 1960s. Former Byrds bassist Chris Hillman recalls writing “So You Want to Be a Rock ‘n’ Roll Star” in Laurel Canyon in 1966 in his house, on a steep winding street with a name he doesn’t remember. The Doors’ lead singer Jim Morrison reportedly wrote “Love Street” while living behind the Laurel Canyon Country Store. Michelle Phillips lived with John Phillips on Lookout Mountain in 1965 during the Mamas and the Papas’ heyday. Books and documentaries have mythologized and romanticized this woodsy canyon nestled behind Sunset Boulevard in the Hollywood Hills. (Vanity Fair, 2015)

What is undeniably true is that from the mid-1960s to the early 1970s some of the most melodic, atmospheric, and subtly political American popular music was written by residents of, or those associated with, Laurel Canyon—including Joni Mitchell, Neil Young, David Crosby, Stephen Stills, Graham Nash, Chris Hillman, Roger McGuinn, J. D. Souther, Judee Sill, the Mamas and the Papas, Carole King, the Eagles, Richie Furay (in Buffalo Springfield and Poco), and many more. (Vanity Fair, 2015)

Join us on a journey through the most indelible decade, comprised of soothing, warm harmonies, and guitar laden stories that influenced artists from that point on. It was an amalgam of influences that included blues, rock and roll, jazz, Latin, country and western, psychedelia, bluegrass, and folk, a forerunner of today’s “Americana.”

Escape to Laurel Canyon is a 2 hour spectacle of site and sound. Painstakingly reprising the worlds greatest harmonies through the songs you love and remember singing along to.

#1.) ORDER YOUR TICKETS online www.ticketscene.ca
Tickets and additional information are available online www.ticketscene.ca / Tickets start at $49 (+hst & fees) and are being offered in a limited number of tables for 2, 4 or 6 guests or concert seating at the bar.
#2.) RESERVE FOR DINNER (optional) phone 519-273-3424 or online at www.revival.house
Concert table seating is limited! Once you purchase a table for the concert, we suggest you make a pre-show dinner reservation and enjoy the show from your table for the evening!

Please Note * If this performance is cancelled due to COVID-19 all prepaid tickets will be refunded.