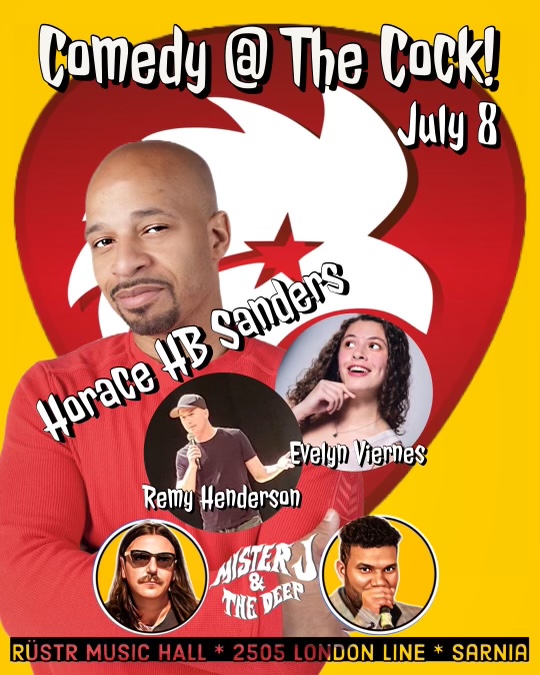 Comedy is coming to Ruestr on July 8th 📣🎉🎉🎉
But, not just any comedy… the current reigning STAR SEARCH CHAMPION! 💪🏽 🏆
“Horace HB Sanders” is bringing his unique show to Sarnia! This Detroit native has combined his gifts of writing, improvisation and acting, while utilizing his unique perspective, to become a World Class Stand Up Comedian. No matter the location; whether a sold out arena, church, corporate gathering, comedy club, university concert or TV production, Horace H.B. Sanders is guaranteed to deliver.

Horace is honored to be the reigning "CBS Star Search Comedy Champion" with a combined perfect score from live home audience and celebrity judges. He has been featured on numerous networks including ABC's "Detroit 187", BET, Comedy Central, The Word Network and Pure Flix. Horace is also co star of the critically acclaimed documentary "Funny". He performed in front of more than 40,000 people at Phillips Arena (Atlanta, GA) alongside Steve Harvey and The legendary Sinbad.

They say that we are a product of whom we hang around with. In that case it is no wonder that Horace is on his way to unprecedented success because he has worked with a plethora of artists from JB Smooth, Dave Chappelle, Bernie Mac, LeAnn Rimes, Anita Baker, Kevin Hart, Chris Rock, Aretha Franklin, to name a few. Once you have seen Horace H. B. Sanders perform you will know why the H.B. stands for
Hilarious Brother!".

Horace will be joined by 2 other Great comedians Sarnia’s own Remy Henderson & London’s Evelyn Viernes and kicking off the night with music from Mister J and The Deep this night is sure to be amazing!

THIS EVENT IS SPONSORED BY CARYL BAKER VISAGE in LAMBTON MALL💄 🙏 🥰