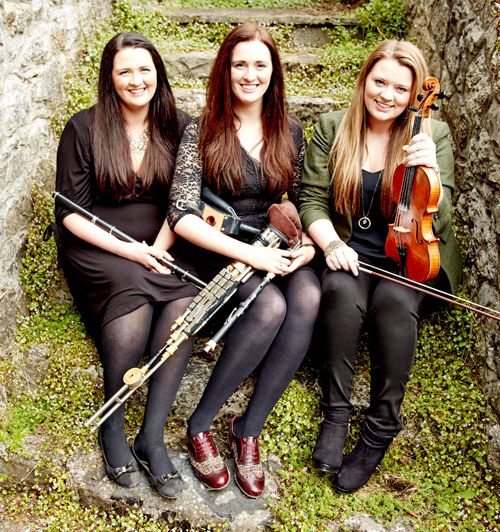 The Friel Sisters, Anna, Sheila and Clare Friel are young Irish traditional musicians born and brought up in Glasgow with their family roots firmly entrenched in the Donegal Gaeltacht, Ireland. They play a mixture of music interspersed with songs in English and Irish, many from their family repertoire. Being siblings, they achieve a close blend on fiddle, flute and uilleann pipes. Since the launch of their debut album, they have performed in various venues and festivals across Europe, America and Asia and have appeared as guests on stage or toured with acts such as Altan, The Chieftains, Lúnasa, Sharon Shannon, The Máirtín O’Connor Trio, Cherish the Ladies and Solas. They released their second album ‘Before the Sun’ in 2017. It was launched at Scoil Gheimhridh Ghaoth Dobhair, in Donegal in December 2017 and at their sold out Celtic Connections gig in January 2018. Since it’s release, ‘Before the Sun’ has been very well received, getting 4 stars in the Irish Times.

“Listen to the Friel Sisters and you’ll discover something so close to perfect you would be hard pressed to make it any better… Richness, depth and presence” – FolkWords

“They breathe music, they live music, they love music. Traditional Irish music is in a richer place for having these young genuine people carry it on to future generations.” – Mairéad Ní Mhaonaigh of Altan

Patrons who book a dinner reservation at the Marienbad Restaurant (next door) are allowed to reserve chairs in Chaucer's prior to the 7:00 pm opening of the doors.