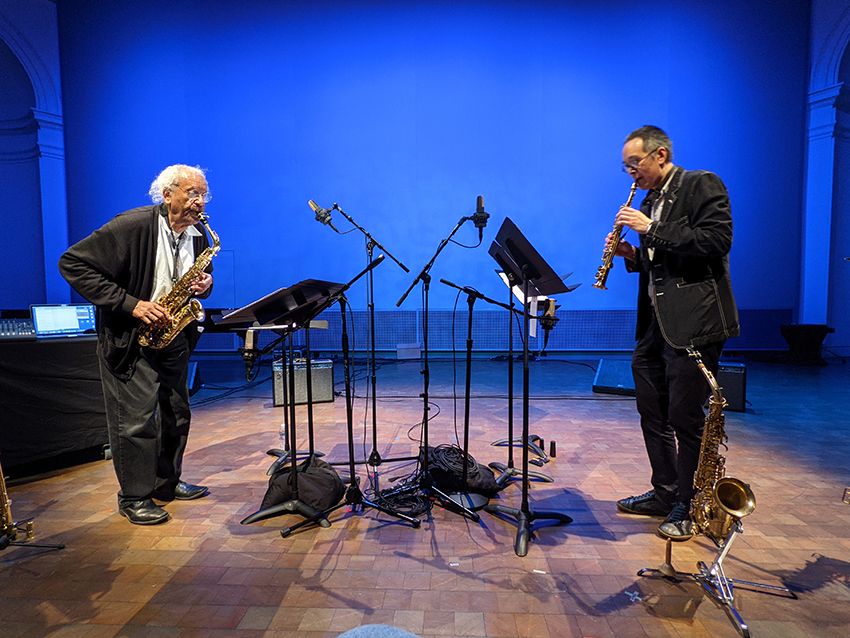 Anthony Braxton is widely and critical acclaimed as a seminal figure in the music of the late 20th century. His work, both as a saxophonist and a composer, has broken new conceptual and technical ground in the trans-African and trans-European (a.k.a. “jazz” and “American Experimental”) musical traditions in Northj Anmerica as defined by master improvisers as Warne Marshm John Coltrane, Paul Desmond, Ornette Coleman, Albert Ayler, and he and his own peers in the historic Association for the Advancement of Creative Musicians (AACM founded in Chicago in the late ‘60s); and by composers such as Charles Ives, Harry Partch and John Cage.

He has further worked his own extensions of instrumental technique, timbre, meter and rhythm, voicing and ensemble make-up, harmony and melody, and 20-century European art music as defined by Schoenberg, Stockhausen, Xenakis, Varese and others.

Braxton’s three decades worth of recorded output is kaleidoscopic and prolific, and has won and continues to win prestigious awards and critical praise. Books, anthology chapters, scholarly studies, reviews and interviews and other media and academic attentions to him and his work have also accumulated steadily and increasingly throughout those years and continue to so. His own self published writings about the musical traditions from which he works and their historical and cultural contexts (Tri-Axium Writings 1-3) and his five-volume Compositions Notes A-E are unparalleled by artists from the oral and unmatched by those in the literate tradition.

Braxton is also a tenured professor at Wesleyan University, one of the world’s centres of world music. His teaching career, begum at Mills College in Oakland, California, has become as much a part of his creative life as his own work, and includes training and leading performance ensembles and private tutorials in his own music, computer and electronic music and history courses in the music of his major musical influences, from the Western Medieval composer Hildegard of Bingen to contemporary masters with whom he himself has worked (e.g. Cage, Coleman).

Braxton’s name continues to stand for the broadest integration of such often-conflicting poles as “creative freedom” and “responsibility”, discipline and energy, and vision of the future and respect for tradition in the current cultural debates about the nature and place of the Western and African-American musical traditions in America.

James Fei (b. Taipei, Taiwan) moved to the US in 1992 to study electrical engineering but lost his way in music, becoming a composer, saxophonist and live electronic musician.

Works by Fei have been performed by the BBC Scottish Symphony Orchestra, Orchestra of the S.E.M. Ensemble, Bang on a Can All-Stars, MATA Micro Orchestra and Noord-Hollands Philharmonisch Orkest.

Recordings can be found on Leo Records, Improvised Music from Japan, CRI, Krabbesholm and Organized Sound.

Compositions for Fei's own ensemble of four alto saxophones focus on physical processes of saliva, fatigue, reeds crippled by cuts and the threshold of audible sound production, while his sound installations and performance on live electronics often focus on electronic and acoustic feedback.

Fei received the Grants for Artists Award from the Foundation for Contemporary Arts in 2014 and he is president of Anthony Braxton's Tri-Centric Foundation.

Fei has taught at Mills College in Oakland since 2006, where he is Professor of Electronic Arts and heads the Art and Technology Program.

Nadja is a duo of multi-instrumentalist Aidan Baker and bassist Leah Buckareff—active since 2005—and making music which has been described as ambient doom, dreamsludge, or metalgaze, a signature sound which combines the atmospheric textures of shoegaze and ambient/electronic music with the heaviness, density, and volume of metal, noise, and industrial.

Nadja has released numerous albums on many different underground labels—Alien8 Recordings, Daymare Records, Robotic Empire, Hydrahead Records, Gizeh Records, and Important Records, to name a few—including their own imprint, Broken Spine Productions. The duo has toured extensively around the world—including performances at such festivals as SXSW, FIMAV, Roadburn, Donaufest, Le Guess Who, Incubate, and Unsound—and has shared stages with artists like Earth, OM, Khanate, Neurosis, and Godflesh.