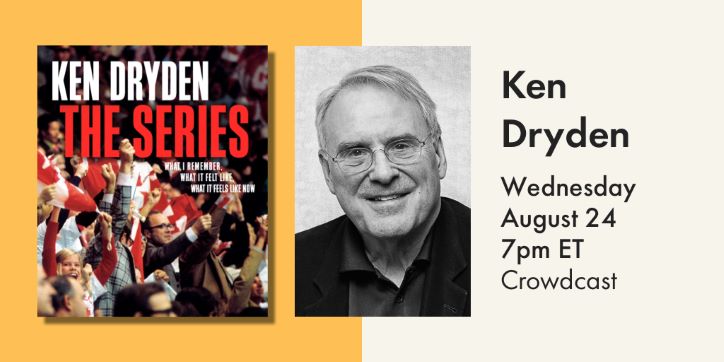 Join Ken Dryden, Hockey Hall of Fame goalie and bestselling author, as he talks about his new book The Series with columnist Stephen Brunt, celebrating the 50th anniversary of the 1972 Summit Series; one of the most significant events in all of Canada’s history.

Purchase a copy of The Series to join this incredible event, and receive a PERSONALIZED bookplate from Ken! Bookplates will ship directly from Penguin Random House Canada, separately from the book, and may take 4-8 weeks to arrive. Name used will be the first name you input when adding ticket to cart.

SEPTEMBER 2, 1972, MONTREAL FORUM, GAME ONE:
The best against the best for the first time. Canada, the country that had created the game; the Soviet Union, having taken it up only twenty-six years earlier. On the line: more than the players, more than the fans, more than Canadians and Russians knew.
So began an entirely improbable, near-month-long series of games that became more and more riveting, until, for the eighth, and final, and deciding game—on a weekday, during work and school hours all across the country—the nation stopped. Of Canada’s 22 million people, 16 million watched. Three thousand more were there, in Moscow, behind the Iron Curtain, singing—Da da, Ka-na-da, nyet, nyet, So-vi-yet!
It is a story long told, often told. But never like this.
Ken Dryden, a goalie in the series, a lifetime observer, later a writer, tells the story in “you are there” style, as if he is living it for the first time. As if you, the reader, are too.
The series, as it turned out, is the most important moment in hockey history, changing the game, on the ice and off, everywhere in the world. As it turned out, it is one of the most significant events in all of Canada’s history.
Through Ken Dryden’s words, we understand why.

KEN DRYDEN was a goalie for the Montreal Canadiens in the 1970s, during which time the team won six Stanley Cups, and he played for Team Canada in the 1972 Summit Series. He has been inducted into the Hockey Hall of Fame. He is a former federal member of parliament and cabinet minister, and is the author of eight books, including The Game, Home Game (with Roy MacGregor), Game Change, and Scotty. He and his wife, Lynda, live in Toronto and have two children and four grandchildren.

STEPHEN BRUNT is an award-winning writer and broadcaster. He is the author of the #1 national bestsell­ing Searching for Bobby Orrand All the Way, with Jordin Tootoo. He lives in Hamilton, Ontario, and in Win­terhouse Brook, Newfoundland.