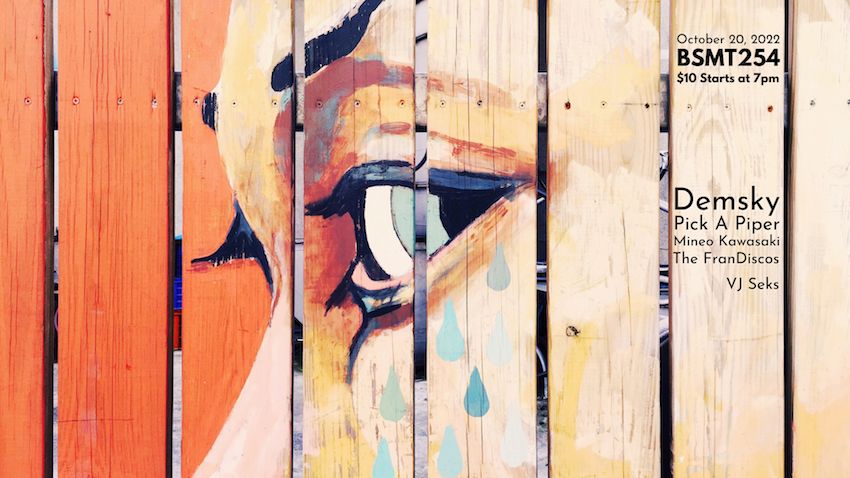 Canadian beatmaker Demsky has gained rapid momentum by submerging audiences into immersive ambient and downtempo performances throughout Japan, and Europe. Now residing in Tokyo, Toronto-born Demsky pays homage to the instrumental, beat-making, noise music scenes that have been so integral in cultivating his sound. He has graced the stages of many festivals such as the Asagiri Jam (Japan), Zizkovska Noc (Czechia), Tone River Jam (Japan), and Come Together Music Festival (Canada), as well as countless tours throughout Europe, Japan and Canada. His music has been featured in various programs such as the docuseries Descending, and works with numerous YouTubers including Ramen Adventures. With a growing fan base domestically and busy touring schedule, don't be surprised to see Demsky performing at a stage near you.

The FranDisco
The FranDiscos have been making Toronto dance for more than a decade. Brothers Andrew and Jonathan are a producer and DJ duo who’ve opened for the likes of Breakbot & Irfane, Little Sims, Haviah Mighty, Jack Beats, Oliver, Hot Chip and Annie Mac. This spring, The FranDiscos created custom beats for Glammy Lee’s fashion show at Fashion Art Toronto – and they even walked the runway.
The pair’s monthly party “Do Better” happens the last Saturday of the month at Dundas Video in Toronto. Listen to their weekly radio show, Radio FranDisco, every Tuesday from 7pm - 9pm on Dubplate.fm and catch their streaming dance party, Televisão FranDisco, the second Saturday of every month on Speakeasy-TV.com

Since the 2019 release of Sight (the third LP from Toronto based producer Brad Weber aka Pick a Piper), Weber has kept himself busy with multiple side projects; co-founding the record label Stereo Ferment amidst the early days of the pandemic lockdowns in 2020 and releasing a 3rd EP under his other moniker Coy Haste in early 2021. Weber returns with a new Pick a Piper EP titled “Sea Steps”, where he tethers themes of sentimental nostalgia with a cautious optimism for the future through his unique style of cinematic, percussive driven electronica.

Weber pushes the production of this EP into unfamiliar territories by exploring a variety of genres, while refraining from any direct points of reference; leaving open portals for future developments of the Pick a Piper sound and offering a thoughtfully crafted thematic listening experience.

Kawasaki is a Japanese drummer and composer. Influenced by post-rock, emo, electronica, minimal, techno, and ethnic music, he has especially admired Ryuichi Sakamoto (YMO) since he was a child.  Though mainly a drummer and keyboardist in the two-drum unit "cowbells", Kawasaki also performs solo, supports other artists, and creates music for commercials and videos.

This will be a solo performance.

SEKS is an acronym for Sabrina Elizabeth Kalli Somethings.  SEKS has been a VJ in the Toronto underground scene for 8 years and has worked with a multitude of production companies, events, and festivals including Architextures, Spectrum, Solstice, Harvest, and many more.

"I enjoy working with live video mixing because the mind is constantly processing, so less available for immediate interpretation and more in tune with the emotion of the moment".

She is currently a resident at Toronto's Wiggle Room.