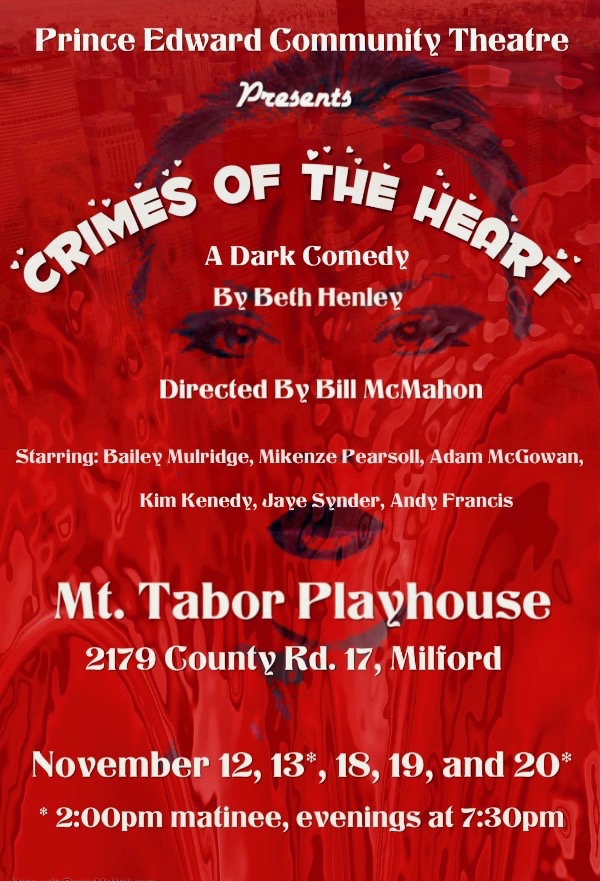 Crimes of the Heart

Please note there are 2 showtimes (matinee & evening) for this production:

Crimes of the Heart”a three-act play by Beth Henley opens five years after Hurricane Camille, in the town of Hazlehurst Mississippi. The entirety of the play takes place in the kitchen of the house belonging to the MaGrath sisters: Lenny, Meg, and Babe. The 3 MaGrath sisters are back together for the first time in a decade. Lenny, the eldest, never left Hazlehurst -- she is the caretaker of the sisters’ cantankerous Old Granddaddy. Meg, the middle sister, left home to pursue stardom as a singer in Los Angeles, but has, so far, only found happiness at the bottom of a bottle. And Babe, the youngest, has just been arrested for the attempted murder of her abusive husband, Zackery.

Beth Henley's central theme in “Crimes of the Heart” is betrayal, particularly that of a fierce and rigid, life-denying patriarchy associated with the South. The 3 sisters around whom the play revolves have been abandoned by their father, an act which subsequently leads to their mother's suicide. Through the dialogue and the erratic actions of the sisters, they reveal secrets about themselves that illustrate the terrible effects that their mother’s suicide and their father’s abandonment have had on each of them. Henley explores the pain of life by piling up tragedies on her characters but she does so with a dark and penetrating sense of humour. It is clear that, whatever wrong has been done to them, all three of them suffer from at least some degree of mental illness.

Over the course of the three acts, each sister confronts her own demons and finds the possibility of change. “Crimes of the Heart” is an indictment of improper parenting, an illustration of the devastation of suicide, and a rallying cry in support of the mentally ill. Themes of loneliness isolation, and humour as the greatest weapon of selfdefense take centre stage throughout. Ultimately, it is a play about the need people have to share their stories with others. It carries the messages that “family” means the people who are always there, whether they are blood relatives or not, and that as long as there are secrets, there will be shame.


Part of: Crimes of the Heart