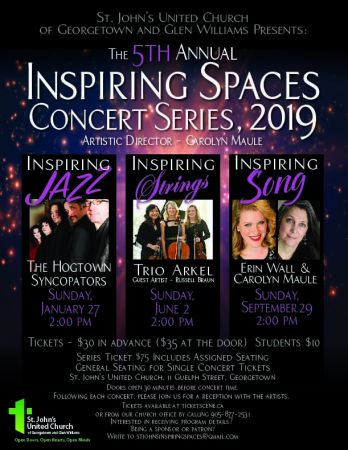 Downtown Toronto’s Hogtown Syncopators, have been generating a serious buzz with their authentic 1930s sound and entertaining show. Along with dynamic arrangements of classic jazz standards, they have a rich repertoire of original compositions building on the classic jazz style. The Syncopators have had a Friday afternoon residency at the respected Rex Hotel in downtown Toronto for 10 years, and can be heard frequently at concert venues and music festivals around the country.

Marie, Canadian violinist concert master of the Canadian Opera Company orchestra, professor at the Royal Conservatory, and Winona, performing as a soloist, with ensembles, and guest principal harpist with orchestras including the COC, are founding members of Trio Arkel. They are joined by Heidi, principal harpist of the Toronto Symphony. Russell Braun, baritone, will be a guest performer with the trio.

New to the St. John’s stage, Erin Wall, soprano, is an opera phenom, recently performing the titular role of Arabella with the Canadian Opera Company. Acclaimed for her musicality and versatility, Erin Wall sings an extensive opera and concert repertoire spanning three centuries, from Mozart and Beethoven to Britten and Strauss. She has sung leading roles in many of the world’s great opera houses, including the Metropolitan Opera, La Scala, the Vienna Staatsoper, Opéra National de Paris, and Lyric Opera of Chicago, and appears in concert with leading maestri and symphony orchestras worldwide. Carolyn Maule, piano, returns to the stage as the two create magical moments together for all of us to enjoy.